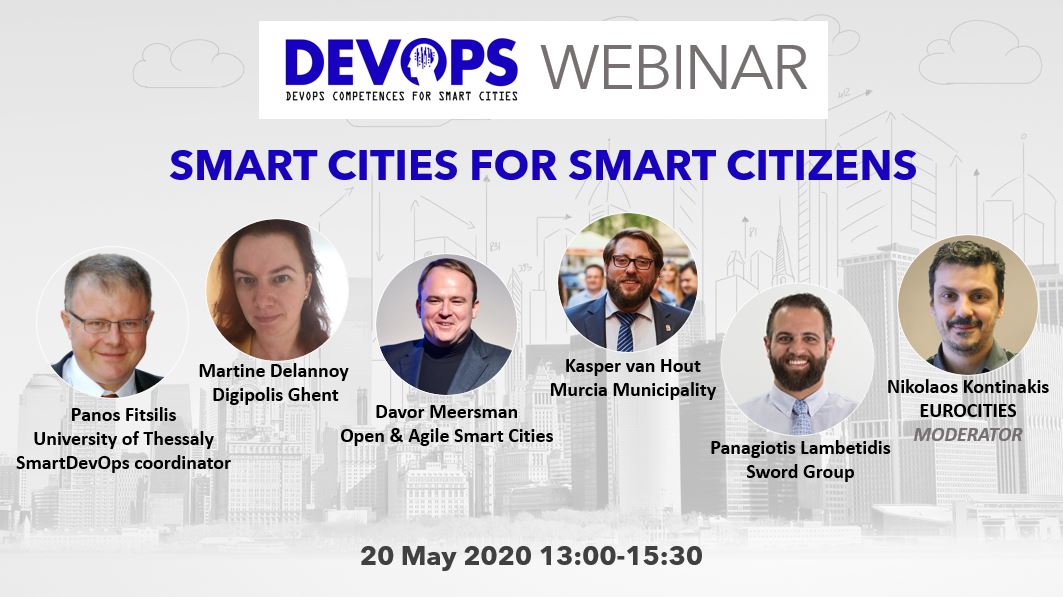 The first webinar hosted on 20 May 2020 by our SmartDevOps project titled “Smart cities for smart citizens” gathered 70 participants in the Zoom meeting space, with more interested people following the live streaming on ALL DIGITAL YouTube channel.

The webinar was opened by Renato Sabbadini, CEO of ALL DIGITAL, and moderated by Nikolaos Kontinakis, Acting Projects Director at EUROCITIES.

Will future cities still be smart? Martine Delannoy set the scene by looking at what the future of cities looks like and how we can reach it in a smarter way. She is one of the few Chief Foresight Officers in Europe today, working on smart cities on a daily basis at Digipolis Ghent, the ICT arm of the City of Ghent, which started as an intermunicipal collaboration between the City of Ghent and the City of Antwerp. Chief Foresight Officers work at the intersection of technology, cities and future.

Martine then outlined the four phases of evolution of the smart cities approach from smart city 1.0 tech driven approach led predominantly by industry, through smart city 3.0, which is currently being adopted by most cities and which is tech-enabled, involving citizens as co-creators, all the way up to the future city 4.0 which involves all systems and stakeholders in a network, at an equal playing field (citizens, academia, business and civil society organisations).

Why do we need foresight? Nobody can predict the future, but city officials need to look into the future and take decisions, because the role of cities is growing – more than 50% of the world population in 2020 live in cities, and in 2050 it is expected that this proportion will increase to more than 70%.

Foresight is here to help these officials to deal with the future. It builds upon hindsight (what we can learn from the past) and insight (intelligence, but not only big data – also contacts, networking, observation, etc.). Foresight looks at different scenarios, and the main question asked is “what if” (e.g. what if citizens retain all their data). Ideas sharing is key in defining the different scenarios. E.g. Ghent introduced the #postcoronapost hashtag, which invites citizens to share their ideas and vision on the post-corona city. This is very relevant for the SmartDevOps project, which aims to build the competences of smart cities leaders, because foresight needs to be integrated as one of those competences. Smart cities leaders must understand the people they lead, and these people might be a very diversified group.

How to build cities’ capacities for sustainable digital transformation? Our next speaker Davor Meersman, the CEO of the Open and Agile Smart cities (OASC) network, spoke about how we can create the smart cities of the future. One of the issues that the network addresses is the lack of interoperability of smart city solutions – the fact that cities have to make a significant investment to adapt a given product or solution to their specific context, which is a barrier for cities to adopting each other’s solutions. At the beginning the network did not know how to solve this issue, but the members realize that they have to do something with open data, open services, open APIs.

The main question the network addressed was “What is minimally needed for cities to exchange solutions, services and data?”. The answer to this question became the “OASC minimal interoperability mechanisms (MIMs)”, which include Context management (allows to exchange context information), Personal data management and Fair AI (where AI is taking decision instead of citizens or impacting citizens decisions). The benefit for cities in adopting the MIMs is that is allows them to avoid vendor lock-in, so if you are not happy with one vendor, you can more easily change vendors. And the benefits for the companies/vendors to comply with the MIMs is that they can develop once and deploy many times.

Davor pointed to the Finnish EU presidency initiative to create a frame of what is needed to scale up digital transformation solutions, launched in Porto at CITIES Forum on 31 January 2020. The pace of change that cities can transform themselves as administration is slower than the pace of technological change, and capacity-building efforts such as DevOps are very important in this context. Lack of capacity and skills is the second most important barrier (after finances) to deployment of digital urban platforms, for example. With the same aim, OASC is currently developing the OASC Academy, which will be launched in September 2020. What skills for smart citizens? After Davor spoke about the capacity building and skills of people working in or for cities, Kasper van Hout complemented the picture with the other side of the coin – smart citizens’ skills. Kasper works at the City of Murcia, which holds the title of best smart city in Spain, and the co-chair of the digital citizenship taskforce of EUROCITIES knowledge society.

He admitted that a lot of people think that public administration is a lagger when it comes to innovation. Innovation is usually attributed to companies and private stakeholders. Administrations do try to keep up with citizens’ needs, they do use social media, platforms, webpages, and ICT tools. The digital citizenship task force aims to supports cities to embrace the shift towards digital citizenship and support their citizens.

Kasper pointed out that there are many definitions about smart cities, some of them also mentioned by the previous speakers, but when it comes to smart citizens, there aren’t that many. The definition he proposed:

“citizens that meaningfully engage in the co-creation of their city through new “smart” tools”.

Using digital tools for all this entails various issues, data privacy among others. Citizens should have the skills to take responsibility for managing their data, because even if we have data protection laws, we cannot expect companies to care about our rights beyond what is required by law.

So, what are the skills for smart citizens? Here comes the question about the digital divide. All citizens should have digital literacy in order to be able to interact and be benefit from our networked society. Whose responsibility is citizens’ digital literacy? For Kasper, the responsibility of local governments lies less in what skills citizens need to learn, but mainly in making sure that the apps and digital solutions they propose are easy to use.

What is the DevOps approach? After a short break, the second part of the webinar focused on the DevOps approach and Smart-DevOps project. Panagiotis Lambetidis, IT and security manager and a DevOps team lead in large projects at Sword group, a big international IT company working among others for public authorities. Panagiotis has specific experience with DevOps practices, and his mission was to bring some light to the DevOps approach and how it can benefit the future smart cities. Panagiotis concluded his intervention by reflecting on how all this can benefit the next smart city – cities can have a common approach involving the development, operations and business teams, which is faster and more efficient, and with minimum issues. As example he mentioned the response of the Greek department of state to the COVID-19 crisis, where a portal and SMS service was set up in just a couple of days thanks to this approach.

What is the DevOps project about and how does it contribute? Our final speaker was Panos Fitsilis, professor at the University of Thessaly with an extensive experience in smart cities and development of deployment of large IT systems, and SmartDevOps project coordinator. He introduced the DevOps project, where universities, networks and IT companies work together to bring the DevOps approach to cities officials and those aspiring to the employed in the sector.

Cities have to be seen as a system which has many different needs (energy, transport, etc.). The complexity related to smart cities is that we need to focus on all these requirements and needs together. And this requires not only capacity building, but also a change in culture, in the way we look at cities. In recent years, many projects have been funded, but most of them are focused on a concrete technology – smart green, smart energy, etc. But insufficient attention has been given to the citizens, how to involve them, how to build their skills, or the skills of the people working in municipalities in order to bring and implement the changes proposed by those innovative projects. Projects should be more focused on the cultural and mindset change. This is the gap that the SmartDevOps project tried to fill with the following aims and objectives: The webinar concluded with a Q&A session, where our speakers addressed questions posted by the audience such as how smart cities can respond to the needs not only of their residents, but also of tourists; what about connecting citizens in a similar way to IoT; how they see tracking apps for COVID-19; digital rights of citizens, and other challenging reflections. We would like to thank all speakers for their insightful contributions and participants for their attendance and questions. We will keep you updated on the upcoming events on smart cities and the DevOps approach, so stay tuned through our website and social media channels.

You can download speakers’ presentations from the Dropbox folder here.

See the livestreaming of the webinar:

Smart-DevOps article in the “Education and Information Technologies” (EAIT) journal

Webinar about SmartDevOps MOOC on 15 October