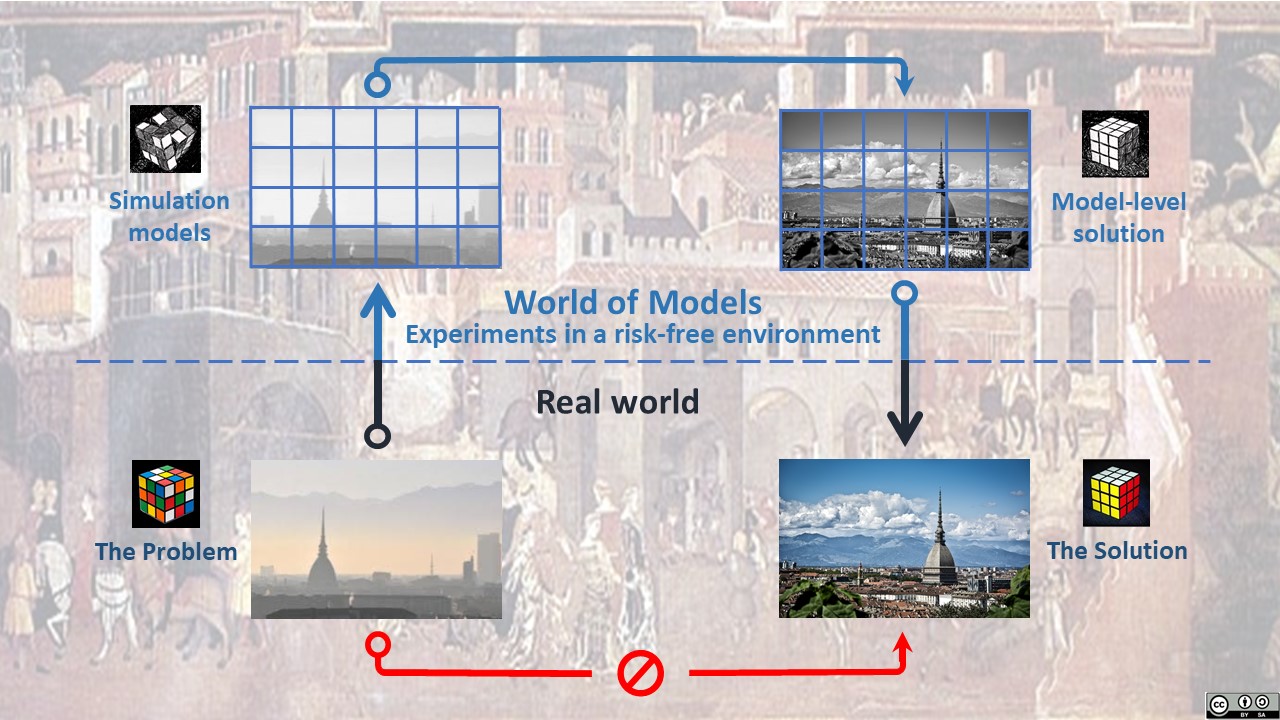 by Stati Generali dell’Innovazione, IT

In this article, the reader will find an exposition of the “Digital Twin” concept: how it originated and why recently it has been associated with the development of the “smart” processes applied to urban areas and territorial communities in general.

It is preparatory for subsequent writings, concerning some binding requirements to apply this concept to Smart Cities, new arising professions, and the consequent training needs: topics that can be deepened through the development of Smart DevOps.

Replicas of real cities are appearing in many parts of the world: the so-called “Digital Twins of Smart Cities”.

The term Smart City has nowadays entered the common lexicon, at least in contexts where one talks about topics related to the use of information and communication technologies within urban areas. In this paper, the term Smart City has the meaning of conceptual synthesis of the Digital Transformation within a projection of a future city that reflects the cultural evolution and social perspectives of our era.

This holistic definition of the term smart allows us to consider the implementation of the Digital Twin having in mind the numerous, possible concrete application areas of a Smart City, without referring to any specific.

The Digital Twin of a Smart City is its faithful copy in the virtual world.

Based on the original concept developed for industrial systems, it is applied to the urban context thanks to the progress made in the field of geospatial technologies[1], specifically of the three-dimensional (3D) digital modelling of the city. Once the digital model of the city (City Model) has been created, the digital twins of the management systems of the smart city, such as those concerning: (i) intelligent buildings, (ii) infrastructures devoted to people and goods mobility, (iii) energy, TLC and water distribution networks, are aggregated to it.

The resulting digital ecosystem allows stakeholders of the Smart City -both public, private and of the civil society- to:

The scheme in figure 1. conceptually describes the combination between the physical system of the city and its virtual system; the connections highlight the data/information flows between the two coupled entities.

Figure 1. Conceptual Scheme of the Digital Twin for Smart Cities

Origin and evolution of the Digital Twin

The conceptual idea of the “twin system” is dated and experienced a wide development in the space programs of the 1960s. It was tragically possible to verify its validity when the Apollo 13 (1970) spacecraft accident occurred. It will be remembered that during the journey to approach the Moon, an explosion in the service module caused serious damage to the oxygen tanks, which forced the interruption of that mission. The rescue of the astronauts was also possible thanks to the availability on the ground of an identical reproduction of the spacecraft in space, with which NASA technicians tested possible solutions, before making the final decisions.

The solutions adopted to make these duplicates have progressed in tandem with technological development. At the end of the last century and, still, in the first years of the new millennium, the concept was mainly assimilated to that of “simulation (software) model” of a physical system, developed to study its behaviour during the design phase.

The term “digital twin” began to be used at the beginning of the last decade, to indicate a virtual copy of a physical product integrated into the product’s life cycle management system. The advent of the “Industry 4.0” systemic approach has favoured the development and diffusion of such an implementation technique, whetting the concept evolution. The use of this term has thus become familiar with the rise of that paradigm.

In the last few years, the availability of multiple increasingly powerful technologies -TLC Networks, Clouds, Sensors, Internet of Things (IoT), Big Data, Data Analytics, development of Standards (data & services), Simulation models, Artificial Intelligence, etc.- as well as their convergence in a single platform, in symbiosis with physical structures or devices, led to identifying the Digital Twin as one of the main strategic technological trends of the coming years.

Analysts are unanimous in emphasizing the driver role of the Internet of Things, which has reduced its implementation costs, expanding its application areas. Confident of the consistency of these assumptions, the market analyses on the Digital Twins agree in predicting growth trends in the coming years that will holistically impact industrial production, business models, work organization, education & training and, in general, lifestyles.

The application of the Digital Twin to Smart Cities

Digital Twin technologies can be used within a city’s numerous application contexts, such as preventive maintenance, operational and economic efficiency, improved services for citizens, increased safety and security, as well as intrinsic possibility automated generative design.

The Digital Twin concept can concern different scales. One can apply to a specific area of the urban territory, to the entire surface of a city (regardless of its size), to an extension comprising rural areas, up to considering the whole nation.

Many urban worldwide communities have already adopted these tools, and their number will grow.

The institutions of these pioneering cities are facing multiple problems, mainly related to:

The perspective that supports these challenging paths is recognized in the attitude and willingness to cultural change and in the propensity to favour their wide diffusion in social environments, both physical and virtual. While working to manage the present, these cities simultaneously wonder about the possible lifestyles and needs of its citizens with a horizon of 20-30 years.

They have acquired awareness of the need to leave the city’s point of view as we see it today and have always known it. A digital platform or ecosystem designed following this approach could not correspond to the expectations of the cities of the future. By 2050 most people will live widely in digital reality, interconnected with anything imaginable. By delving into the potential offered by a digital twin city, these avant-garde institutions are experiencing the difficulty of formulating plausible hypotheses on how future reality will relate to the way people will live. On the other hand, awareness of this limit is recognized as the keystone, the correct approach to try to anticipate the future.

Today, there are only a few examples of Digital Twins applied to Smart Cities, but they are expected to increase very rapidly in the near years. Forthcoming articles will show some binding requirements to apply the concept of the Digital Twin to Smart Cities and implications concerning education and training for new jobs.

[1] The set of specialized IT technologies that support the acquisition, management, analysis and display of territorial (or geographic) data. For instance, geospatial are those technologies relating to geolocation and traceability, processing of geographic data, analysis of satellite images, topographical surveys, etc.

The City Model for Digital Twins